All original content, including cartoons, can be freely distributed. I'd appreciate credit being given to my site but if you want to just take it then go ahead.

Here's an article from the American ABC News ("Bush Authorizes New Covert Action Against Iran") regarding a covert operation into Iran that has just been approved by George W Bush:

The article was written by Brian Ross and Richard Esposito.

The basic thrust of this article is that an anonymous source has confirmed that Bush has given approval to a CIA operation to destabilise the Iranian Government.

"President Bush has signed a "nonlethal presidential finding" that puts into motion a CIA plan that reportedly includes a coordinated campaign of propaganda, disinformation and manipulation of Iran's currency and international financial transactions."
The gall of these people to even think they have the right to meddle like this in someone else's country! A country that has not initiated any force against the US.

In my opinion, this is the same sort of meddling that encouraged the retributions of 911.

It also raises a number of key questions:

1) What sort of action will Iran respond with?

2) If this triggers a military action (remember the last war that the US was in was WWII, the others were not constitutionally declared) then how will it be paid for? 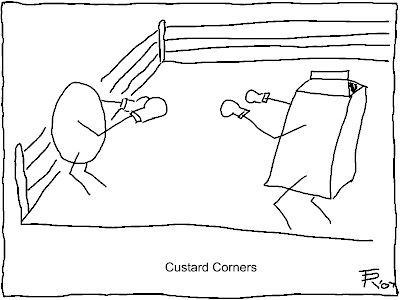 Ardeet
Original content, including cartoons, can be used free of charge. I'd appreciate crediting but they're free to take.